Last Thursday afternoon, 23 November 2017, I attended the workshop (En)gendering new conversations: Ethnographic research and its contribution to politicized debates on gender and sexuality of the Network for the Anthropology of Gender and Sexuality of the European Association of Social Anthropologists at University of Groningen, the Netherlands. It was organised by Kim Knibbe (University of Groningen) and Ana Fedele (Lisbon University Institute). I was struck by the opening keynote lecture of Tamsin Bradley (Professor in International Development Studies at the Faculty of Humanities and Social Sciences of the University of Portsmouth) and the presentations of the four speakers in the first session which had been organized by Marina de Regt and Brenda Bartelink as representatives of LOVA. How socially relevant these issues are I realised even more when I learned two days later, 25 November 2017, about the many meetings and activities during the annual International Day for the Elimination of the Violence against Women of the UN and the orange colouring of worldwide famous buildings, statues and bridges (like Erasmus bridge in Rotterdam) because of this day. Below I’ll share some striking issues I heard in the keynote and my reflection on it. 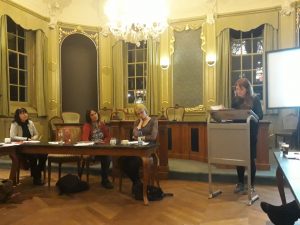 Tamsin Bradley presented in her keynote some relevant thoughts on the intersections of gender, religion, culture and violence. She focused on the debate regarding the banning of the practice of female genital mutilation (FGM) – I do prefer the description of female genital cutting (FGC) or female circumcision, FGM is a judging and disapproving term – to show ambivalences regarding feminist anthropology. Tamsin stated that it is most important to use the language of cultural relativism in order to navigate between the activist struggle for banning FGC and taking seriously the critique of ethnocentrism and reproducing postcolonial narratives of underdeveloped poor victimized women. Cultural relativism can be used strategically for more successful banning FGC campaigns. We should learn more about the context of FGC and the intersection of so many influencing factors to understand why this practice continues to exist. To understand why it is defended by some women migrants from Northeast Africa and Eastern Asia in Europe. Deep ethnography by herself and other researchers helped Tamsin to do so.

One of the issues she shared with us was that we should acknowledge that FGC is a women’s business, it gives women control over their own sexuality. The patriarchy argument falls short, FGC does not (only) exist because of women’s subordination to men. Marking borders between groups is a much more important explanation for the consistency of FGC. Women are prepared to bear the pain of circumcision in order to belong to a specific group. Like women are willing to bear the pain of giving birth to a child. It gives them control over their own body. Research revealed women stating that they enjoyed sexual intercourse even more because of their FGC. And it is more a cultural phenomenon than a religious one. It is not an Islamic duty, although many people in Egypt, Sudan and Somalia think so. Christians in these countries practice it also and among Muslim leaders in for example Sudan there is a large variety in opinions about the introduction and implementation of prohibitive laws regarding FGC. Migrant women from Somalia in London protested the FGC prohibition law in the UK and anti-FGC campaigns because they did not like the interference of others with their lives and bodies, they experienced the campaign as racist, reductionist and condescending and they felt they were not really listened to by the activists.

The information of Tamsin’s keynote was very clear and well presented. However, being a senior white native Dutch woman myself I remembered the fierce discussions I had as a student in anthropology with fellow female students in the 1970s about the same issue. It was the time when I first learned about the phenomenon of FGC and its various types. At the 1975 UN World Conference on Women in Mexico City, organized because of the UN International Women’s Year, the issue had been brought up and a start was made with a worldwide anti-FGC movement. I was shocked to learn about female circumcision, although as being a young feminist at that time I had already read about so many different forms of constructing and violating women’s bodies in specific forms and models in relation to some dominant fashion in various cultures and time periods. I had read about changes in European fashion and ideas about women’s beauty. Thick or thin bodies, modest or active behaviour, focus on lips or on eyes, on breasts or buttocks, and so on. I had learned that in all cultures women (and men) are expected to model the body in specific ways, by cutting and shaving of hair, decorating the skin with cuttings, tattoos, whiteners or darkeners, enlarging or shrinking specific body parts. I had read about the custom of women’s foot binding in China and about women’s cosmetic surgery in the Netherlands for enlarging or downsizing breasts or noses. In the debates with my peer students we discussed what makes the custom of FGC so special when you compare it with so many other customs which violate women’s health and sexual pleasure?

When I listened to the presentation of Tamsin I had to think about all those issues. I am glad that the discussion is still going on and that anthropologists, gender aware anthropologists especially, do participate in these debates and in the struggles to ban women’s circumcision. But I also hope that we do not confine to FGC as a custom of a specific group of people in and from some specific places and cultures in Africa and Asia. I hope that we also look to women violating customs in the dominant culture of Western Europe. For example, I wonder about the health of all those women who currently wear fashionable very high heels during their work, like our queen Maxima and the readers of the news shows at the public Dutch television. What about the wellbeing of their feet and legs in due time?