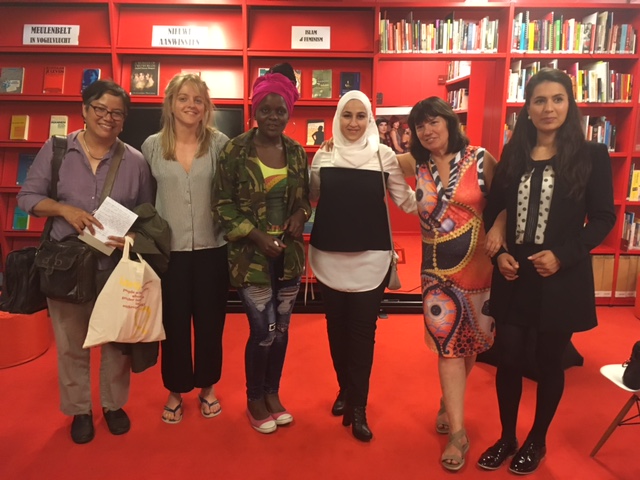 On Thursday evening July 6 LOVA organized an evening about gender and migration in The Netherlands, in cooperation with Atria, institute on gender equality and women’s history and the Worldhouse (het Wereldhuis), a Dutch organization supporting undocumented people with counseling, education and culture. The aim of the evening was to discuss the obstacles migrant and refugee women encounter in the Netherlands and ways to improve their living and working conditions. Migration issues are a hot topic in the Netherlands, and in Europe as a whole. While migrants and refugees are portrayed as “a problem”, there is very little attention for the ways in which they struggle with the increasingly restricted laws and procedures in Fortress Europe. In addition, there is little attention for the various ways in which migrant and refugees try to improve their situation. This is particularly so for migrant women.

At the beginning of the evening women of the Worldhouse offered Moroccan tea, Ethiopian coffee and sweet and sour snacks, which immediately gave the event a special dimension. I had organized the event and also chaired it and welcomed everybody. After a short introduction by Ester de Jong (ATRIA) in which she presented some basic information about gender and migration in the Netherlands, three women told their personal stories of migration and refuge, with a special focus on their experiences living in the Netherlands. Louma Nouralla came to the Netherlands in 2014, with her three young daughters fleeing the war in Syria. Her husband had made the dangerous trip by boat and was already here. She started her beautiful slide presentation with a short introduction about Syria and Aleppo, and the background of her family. Educated and encouraged to build their careers, Louma and her sister were working in the fashion industry. They had never imagined that they would have to seek refuge, first in Lebanon where living conditions were very hard, and then in the Netherlands. “I was expecting that every new start is hard, but I wasn’t expecting that I would start from below zero. That’s not easy for a woman: she has to draw herself a new plan to reach the same heights she has attained before. Here in Holland it was a different scene and the obstacles of starting are many, not only did I have to master a new language, but after learning the language there were the obstacles of entering the business market and other.” Louma told us about the many initiatives she is developing in order to build up a new life and the obstacles she encounters. Yet, despite the hardship she is hopeful and calls on every Syrian woman “to hold together and be active in building the state and rising the country from within as mothers, wives, providers and leaders.”

Palwasha Muhammad fled to the Netherlands from Afghanistan in 2014, after having received threats from the Taliban that they would kill her and her family in case she would continue her work for women’s rights. She was working for international organizations such as USAID and Oxfam, and had received threats before. The situation became so serious that she decided to leave in the hope that she would be able to continue her work in the Netherlands, a country where her husband was already living with her two children. Having university degrees and a long experience working for international and women’s organizations Palwasha was optimistic about setting up a new life but the reality hit hard. She was confronted with stereotypes against refugee and migrant women, and in particular Muslim women. Her educational background and work experience suddenly seemed irrelevant and getting access to the labour market was extremely difficult. “Refugee and migrant women are all considered uneducated and lacking skills for the jobs”. She is persisting and not giving up, and intending to start a new university study soon, after having obtained the national language exam (staatsexamen).

Cindy came to the Netherlands five years ago fleeing oppression in Uganda because of her sexual orientation. She told us how she had hoped to find rest in the Netherlands, which she thought was a tolerant country, but how difficult it was to live in an asylum seekers center as a lesbian woman. She suffered from discrimination and harassment and moved from place to place, never able to build up a life and a social network that would support her. When her asylum request was rejected Cindy became homeless and started a dangerous and risky life as a young undocumented woman. She vividly shared her experiences with the dark sides of Dutch society, but also showed us her incredible power and her endless fight for a decent life. The Worldhouse gave her a place to be herself and become an active fighter for human rights for undocumented LGBT women.

Ratna Saptari told us about the Indonesian Migrant Workers Union in the Netherlands, an organization supporting Indonesian labour migrants. There are around 6000 Indonesian labour migrants in the Netherlands and many of them are undocumented. They are mainly employed as domestic workers, and the large majority are women, many of them run into problems because their visas expire, or because they are unpaid for months, or they experience other types of exploitation. IMWU helps them by offering legal advice, giving them shelter and sometimes financially by buying tickets to return home but the problems are huge and not easy to solve. Indonesian migrant women are quite invisible in the Netherlands and very few people know that they are present.

After the presentations there were many questions from the audience, and the intimate atmosphere made it possible to discuss issues freely. Louma said about the evening: “I was very happy that I got the chance to talk about myself, about my career, and in particular about the past difficult years, in an atmosphere of respect, calm and welcoming. I was a bit nervous at the beginning but I calmed down because of the friendly atmosphere. By listening to the stories of others, I realized the value of being different, what I have and what someone else may not have, what I don’t know and cannot, and what I can learn from others, and the other way around. This experience has enriched me with the diversity of our convictions, such as words, belief, culture, opinions etcetera.”