On June 15, LOVA is organising a workshop about the relationship between gender and nature in ethnography. We will explore the central theoretical position this relationship could occupy in current debates in anthropology from which it is currently remarkably absent. Professor Veronica Strang, Durham University, UK, specialist on human-environmental relations and people’s engagements with land, and in particular, water, will give the keynote lecture. Professor René ten Bos, Radboud University, National Thinker (Denker des Vaderlands) and author of the book “Wandering in the Anthropocene” (Dwalen in het Antropoceen, 2017) will contribute and act as discussant.

The critical discussion of the nature-culture divide, nowadays so prominent in theoretical debates on human-nature relationships (e.g., Descola 2014; Hastrup 2014; Ingold 2000, 2011), the Anthropocene (e.g., Tsing et al. 2017), and the Ontological Turn (e.g., Holbraad and Pedersen 2017), traces back to the mid-20th century efforts feminist anthropologists made to transcend the sex-gender divide (e.g., Ortner 1974; MacCormack and Strathern 1980). Feminist scholars challenged the association of women with nature as well as the universal exploitation of women and nature all together, and put issues of power and social inequality central stage. This engagement with gender and inequity is remarkably absent in current nature-culture debates. While Gender Studies returns to ecofeminism and Development Studies amply reports on women in environmental issues and global policy (e.g., MacGregor 2017, Vakoch and Mickey 2018), Anthropology strikingly stays behind. In line with critical voices in Gender Studies (e.g., Di Chiro 2017) warning us not to naively engage in studying the Manthropocene or human-nature relationships, we aim to re-introduce gender as a central and critical concept in studying our entanglements with nature, and by so doing, to revalue the classical feminist scholarship in our disciplinary debate.

In the workshop on Gender and Nature we seek to explore how both nature and our interactions with nature are gendered; and how these gendered entanglements with nature relate to cultural diversity, social inequality and prevailing power structures. The starting point then is that nature is always implicit in the making of social life (Hastrup 2014; Strang 2004, 2014). 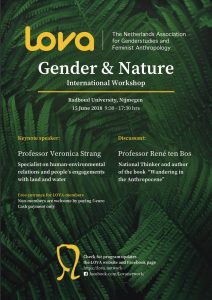